Playing an opening based on understanding is great. Nowadays, we are swamped with opening lines that can go over 30 or 40 moves. Many of us are not chess professionals, so finding the time to study them is indeed challenging.

With this course, you’ll learn aggressive ideas on some of the most common openings (not sidelines) which have withstood the test of time. Arm yourself with an intimidating repertoire based on all these aggressive openings!

Aggressive ideas For BOTH White and Black
Not sidelines
Attacking ideas WITHOUT having to memorize lots of lines
Sound ideas that can be implemented even for classical games
Vigorously play with either colour!

Attacking Ideas From the Most Popular Openings!

In the Sicilian Defense

I’ll show you very good attacking ideas in the Sicilian in general, and specially in the Scheveningen and Najdorf. You can win a lot of games with a very simple plan that I consider is a great suggestion to you.

In the King’s Indian Defense

People love to play the King’s Indian because you don’t need to equalize (like in most cases) until the 20th move and wait to the middlegame to find your own options. Instead, immediately after the opening, you can start to attack the king.

In the Evans Gambit

Why does White want to sacrifice a pawn? Learn about the fight with the Italian with the help of one very aggressive gambit!

In the French Defense

I’ll let you know everything about one of the main lines in the French Defense that I’ve played successfully for many years. Learn how to play the French and some ideas of how to play against it.

In the Scandinavian Defense

In the Ruy Lopez

You could see very nice attacking games, implementing good ideas for Black, in one of the main lines for the Ruy Lopez.

In the London System

The London System has gained a lot of popularity in the last few years. Discover here powerful ideas from top-level players like Magnus Carlsen and Levon Aronian.

In the Queen’s Gambit

As old as it is interesting, the Queen’s gambit is a must! If you don’t play it yet, you should definitely try it; and, of course, you must be ready to fight your opponents who use it. So, here you can learn how to play aggressively on this very classic opening.

AGGRESSIVE OPENING IDEAS FOR BOTH COLORS!

It is necessary to put the received knowledge into practice. There are 8 practical tasks (over 50+ games) in this course which will help you understand and remember the ideas of the course better.

One task per opening!

The practical part contains special videos with instructions and guidance in order to help you solve the tasks.

Marian Petrov is a professional chess coach, theorist and FIDE trainer. Former Bulgarian champion, as well as winner of many open tournaments around the world. Coach of Wales Team at the last olympiad in Baku in 2016.

Author of the book “Grandmaster Repertoire-The Modern Benoni”, GM Marian Petrov is an opening specialist. He prepares professional personalized opening repertoires for his students, which is a great asset for any aspiring chess player. He has taught special lines in the Benoni, Pirc, Sicilian Defense, and other systems, like the French and the Caro-Kann for White among many others.

He graduated from the National Sports Academy in Sofia, Bulgaria with a Bachelor’s degree in Chess Pedagogy, a four-year undergraduate program designed to prepare top-level chess trainers, mentors, and professional seconds of the World Championship contenders.

With this one-of-a-kind higher education degree, typically offered in countries with strong chess tradition, e.g. Russia and USSR former states, GM Petrov is a leading chess trainer in Europe. His impeccable communication skills combined with the various languages he speaks fluently allowed him to teach promising scholastic chess prodigies who later went on to become national champions and European masters competing at the most prestigious tournaments, together with super grandmasters and other players from the world chess elite.

His coaching methods are based on deep analysis of his student’s tournament games, as well as careful examination of other factors, e.g. chess psychology, physical preparation, and overall assessment of student’s qualities as chess players.

Very cjear, perfect presentation and organization. I would get anything by him. 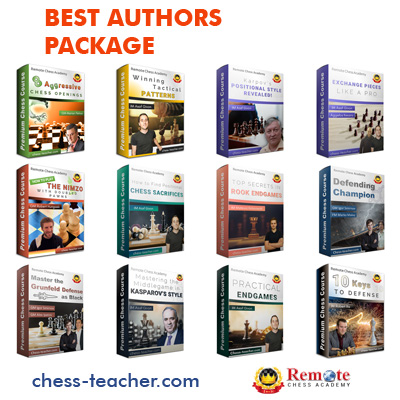